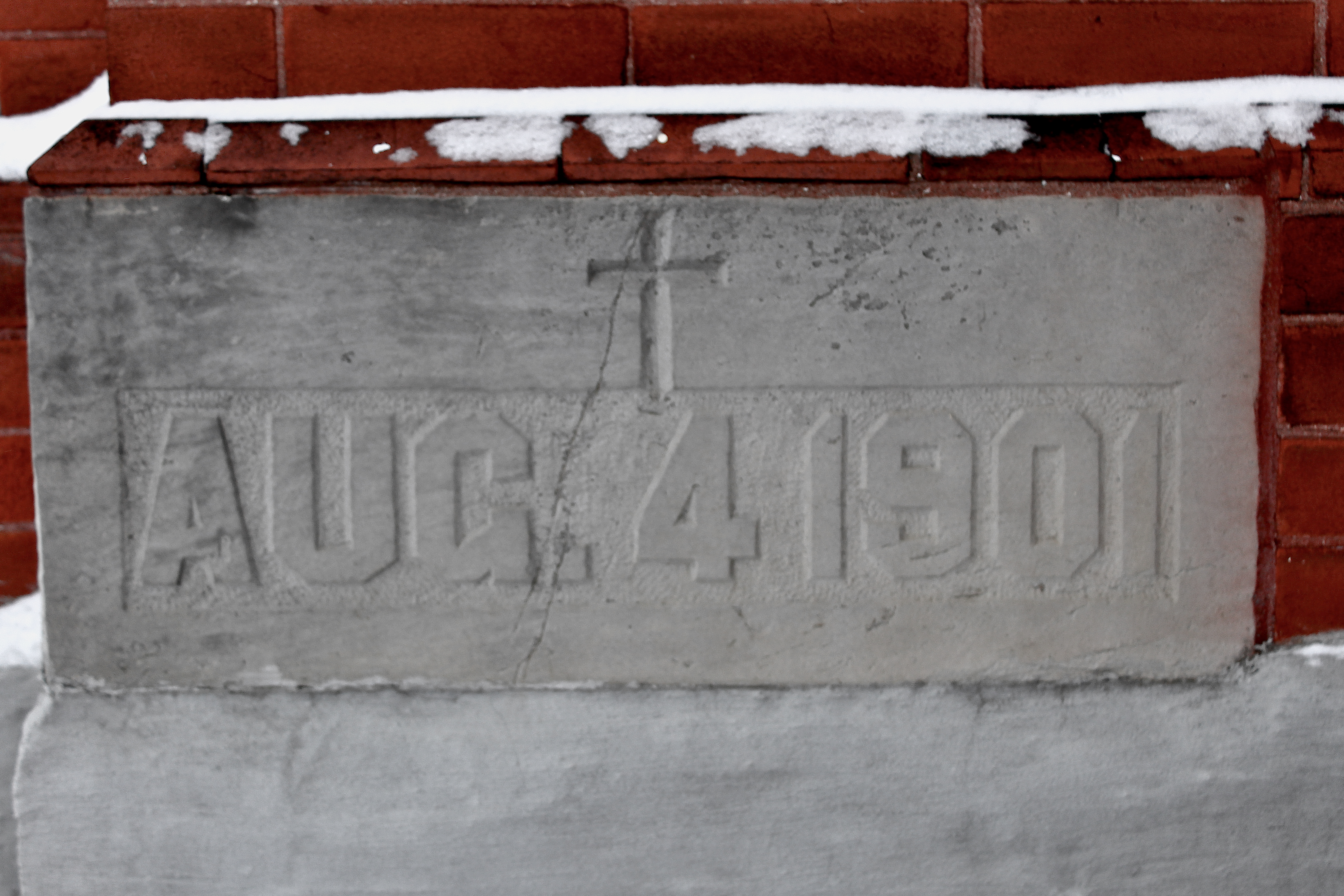 187 years ago Albion folk worshipped at:

1st - A little log Church at the Lockton called Saint Alphonsus, this church was built in 1834 on the south-west corner of Patterson Side Road and The Gore Road just north of St. John’s.

3rd - A large brick edifice and present day Saint John the Evangelist Roman Catholic Church, Albion was constructed in 1901 on the opposite side of the cemetery, and located at 16066 The Gore Road, Caledon, Ontario Canada.

1819 - After the township is surveyed, European settlers begin to arrive in Albion.

1830's - Extensive Irish settlement begins in Albion. Catholic missionaries visit the settlement from Wildfield and Mass is often said at the home of Michael Dwyer.

1831 - Nov. 3rd Michael Dwyer and others send a petition to the Lt. Governor of Upper Canada requesting a land grant (Lot 25, Con. 3 of Albion Township) at the south-west corner of Lockton in order to establish a church for the 200 Catholics in the area.

1845-1847 - Rev. Eugene O’Reilly, Pastor of Wildfield and of Peel County, builds the parish’s next church, St. Adolphus, at a new location. 5 acres is given for a church and cemetery by Michael Dwyer from his property (the east half of Lot 21, Con. 3 in Albion). A Gothic style frame church, 60' x 40' is build and overlaps the present day rectory site.

1897-1904 - Rev. Martin Darius Whelan becomes Pastor of Caledon-Albion and begins preparations for the building of the 3rd and present St. John the Evangelist Roman Catholic Church.

1901 - Sun. Aug 4th at 3:00 pm, Archbishop Denis O’Connor of Toronto laid the cornerstone of the new and present church. 2000 people attend the ceremony. People from various Christian denominations were present.

1902 - Thurs. May 15th 10:30 am, Archbishop O’Connor returns to Albion to dedicate, solemnly bless and open the present day St. John’s Church. That day His Grace erects the Stations of the Cross. The Architect of the new church was Mr. Arthur W. Holmes of Toronto. The church is build in the English Gothic style out of solid red brick with a spire on the outside. Inside 300-400 people can be seated and it is finished with polished oak. The total cost was $8,000.00

1907-1908 Fr. James Minehan built the rectory at St. John’s for the sum of $5,000.00 and resided there when it was complete. Due to the growth of the congregation in Albion, the Principality (head-quarters) of the parish is changed from Caledon to Albion. A road to the new church, a driving shed for the horses and carriages of the parishioners, and a carriage house (now the garage) are added.

1911 - Sun. Oct. 8th, Rev. Robert McBrady, C.S.B., of St. Michael’s College, Toronto, blesses the bell for the new church. It is made of solid brass and weighs 600lbs. The inscription reads, “Ad Majorem Dei Gloriam” (To the Greater Glory of God) “In Memory of our Benefactors, Rev. Jas. Minehan, P.P.”

1915 - St. Cornelius Church, Silver Creek, Caledon Township, is attached to the Parish of St. Timothy in Orangeville. St. John’s Church, Albion, is left as the solitary holder of the parish status granted in 1867.

1915-1918 - Due to the shortage of priests during the First World War, St. John’s, Albion is again served by the Pastor of St. Patrick’s Church, Wildfield.

1918 - St. John’s regains its own Pastor with the arrival of Rev. John M. O’Connor. Albion became a parish in its own right with its own Pastor and without any missions attached to it.

1930's - Electricity is installed in the church and in the parish in general.

1939-1944 - The Second World War wages and sends many family and friends to foreign battlefields to protect freedom for Canada and her allies.

1951 - Sun. July 15, 10:00 am, St. John’s, Albion celebrates its 50th Anniversary of the building of the present day church. His Eminence James Cardinal McGuigan presides over the ceremony. Also present is Most Rev. Francis V. Allen, D.D., and many other priests including Fr. John B. O’Reilly, the historian preacher for the occasion.

1954 - Oct. 15th, Hurrican Hazel passes through the area destroying many of the monuments from the old section of St. John’s Cemetery.

1970's - Regional government brings new residential development to the parish are creating an increase in population.

1975 - Under Fr. Leo Ramsperger’s direction an automatic bell-ringer is installed in the church to sound the Angelus and summon people to worship. Around this time numerous other improvements are made, one of the most visible is the exterior illumination of the church at night, from all directions. This makes St. John's a landmark.

1980's - St. Cornelius rejoins St. John's, and has since been celebrated as Two Churches ~ One Parish

2001 - Sun July 29th, 2:00 pm the 100th Anniversary of St. John’s is presided over by Bishop Robert Clune and he blessed the addition of the Crucifix at the front of the cemetery.

In the successive years, great attention has been paid to the maintenance and restoration of St. John’s. Most recently, a new roof, town water, an improved and paved parking lot, the restoration of gold trim to the altars, a new heating and cooling system, have been completed. With the dedication of our priests, the parish continues to flourish.

A thank you to the parishioners, that over the years have worked together to preserve our Catholic Community Heritage. Finally, from the faithful hands that raised up our dear St. John’s and entrusted successive generations to its care, we thank you, we remember you and we pray for you.

For information on the stained glass windows at St. John's, please click HERE.